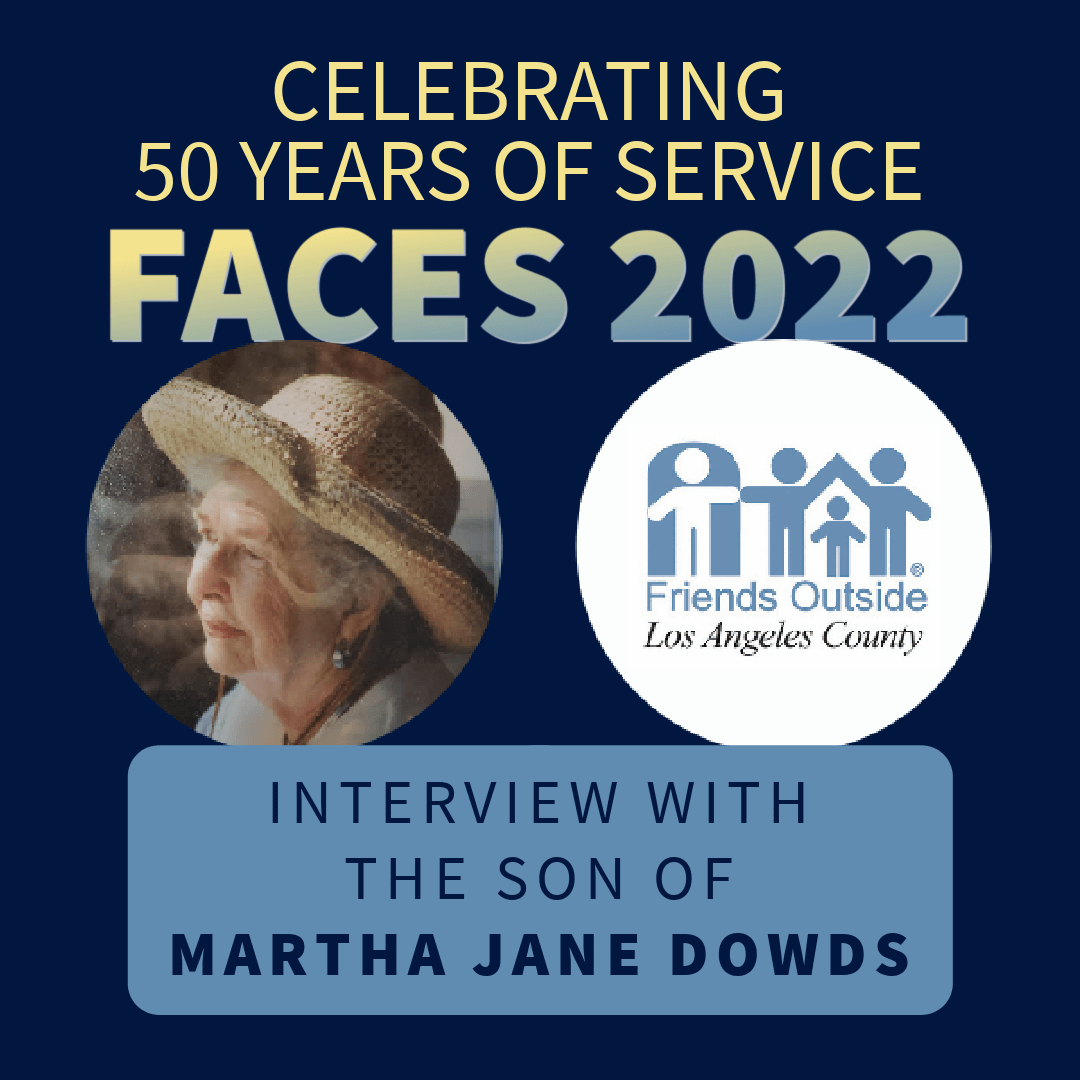 Mary: Tell us a little about yourself and your mother.

Curtis: I am my mother’s oldest child.  My mom was born in 1918 in Arkansas, in the Mississippi Delta.  At the age of eight, driven mostly by drought-induced crop failures, mom and her parents moved to Alhambra, CA, just as the Depression hit. My mom grew up very poor but did so in a family deeply committed to education.   With incredible focus, the family put together the resources for a full college education for my mom and her brother.

Mom emerged from college a progressive person who always saw the potential and good in people.   In 1954, a year before the vaccine, she contracted polio, ironically like her political mentor, FDR.   She met my father at a USC/UCLA mixer.  My dad was a lawyer who became the chief counsel in the L.A. County Counselor’s Office and eventually a prominent Superior Court judge, opening many doors my mom walked through for Friends Outside.

Mary: What do you remember about your mother founding Friends Outside in Los Angeles County?

Curtis: The daughter of Federal William P. Gray, who was on the bench in Los Angeles, was a volunteer for Friends Outside up north and arranged for the initial meeting of “prominent women” in Los Angeles with the Friends Outside Founder, Rosemary Goodenough.  The story is that Mrs. Goodenough would talk until there was one person awake.  She would declare that woman “Mrs. Friends Outside” and leave.  Apparently my mom was the last one standing and started the LA chapter in our San Marino home.  Mom would talk to anyone about the cause and call anyone she needed to move things along, not afraid to wield the implicit power of being a judge’s wife.

Mary: It was the early 1970’s– three political leaders killed the decade before, Vietnam War, peace and love generation.  Do you think the political and social environment of the time had anything to do with it?

Curtis: Yes.  She did not aspire to be in the country club set and the time was right for social activism.  Mom never “outgrew” her childhood experiences.  She was a person of immense empathy and wanted an identity for herself apart from being a “judge’s wife.”   She was determined – she beat poverty and polio.  She had good instincts, insight, and was perceptive. She created Friends Outside LA with “good bones” and Friends Outside gave her purpose.