“Of all the volunteer work she was involved with, Harolyn always said that what she did for Friends Outside was the most challenging, but it also was the most rewarding.” – Mel Sacks

We were saddened to learn that our former volunteer, Harolyn Sacks, passed away this year.  Harolyn was a volunteer jail visitor at the then – Los ­Angeles County Jail for women, Sybil Brand Institute, c 1990.

Harolyn enrolled in Professor Michael Vivian’s Sociology Class at Valley College through which our Jail Visitation Program was offered. The students made weekly visits to a county jail and wrote a journal about their experiences as the final project.  Their role was to be a non-judgmental person with whom to talk and to assist in ways that were approved by Friends Outside.  This might be to help a parent get in touch with their children’s social worker or to help an inmate arrange for housing after release.

We had about 30 volunteers each year but I do not remember them all.  But, I do remember Harolyn and her friend, Susan Silverman, who visited the jail together.  They were bright and curious and sincere.

I had the recent pleasure of meeting Harolyn’s husband, Mel, who I asked for an interview about his wife.

R    We met on a blind date in 1957.  When I introduced myself, I looked into her large and beautiful eyes and fell in love at first sight.  We had a son who has been my law partner for the past 26 years. When our son ­began college, she decided to go back to school and graduated with honors, obtaining her Bachelor’s Degree in Sociology from CSUN in 1997.

Q    Was there one situation that you especially remember Harolyn talking about?

R    Yes, when she visited “Susan,” the daughter of a high-profile, nationally-known person.  Her father had turned her on to drugs when she was a child. Harolyn said she was a sweet and likeable person who had a very ­unfortunate upbringing.  Her father seldom visited her in jail.  She attempted suicide while there. When the deputies contacted her father about the attempt, he told them not to be so quick to get to her the next time she tried. She was eventually successful, committing suicide by hanging herself with her shoelaces.

Q    How did Harolyn describe helping her?

R    She provided a safe place where Susan could talk.  Harolyn advocated to the jail medical services to get her the medicine she needed to control Gran Mal seizures and contacted her public defender to make sure she got visits to plan her defense.

Q    What were the challenges?

A    Gaining the trust of the clients and getting the people in the clients’ lives to help the women when they needed it.  This might be family members, social workers, correctional staff.

Q    What do you think Harolyn got in return for her efforts?  Do you think she was changed as a result of her experience in our program?

A    She was changed in how she perceived the criminal justice system.  One of the major flaws at the time was that, even though more women had entered the profession, the legal system was still, for the most part, the “good ole’ boys club” with women in general getting the short end of the stick. Her experiences with Friends Outside showed her how a system that prided itself on ‘justice” did not in many respects live up to that high platitude especially when it came to the less fortunate – women, the  poor, black and brown, – who were less well-represented in court than their white counterparts.

She loved the challenge of being an advocate for less fortunate women in need.  She was always a compassionate person but she became a more serious advocate for these women because of her experiences in working for them through Friends Outside.

Dear Friends of Friends Outside in Los Angeles County!

Congratulations to our clients and our staff who completed our California Workforce Development Board-funded grant, Forward Focus, with flying colors!  Here are just some of their accomplishments:

Kudos to Helena Henderson, Case Manager, and Jose Cosme Sandoval, Job Specialist, who did this great work with our great clients under the leadership of Irena Seta, Director of Employment Programs!

Friends Outside in Los Angeles County appreciates the hard work by our Project imPACT South LA staff  who recently reached and even exceeded their goals for this City of Los Angeles, Office of the Mayor, funded grant.  Project imPACT provides reentry employment services in addition to behavioral health and legal services to persons with criminal records from four locations across the City.  Our project is located on-site at Los Angeles Trade-Technical College.

Congratulations to Arthur and his team on this outstanding achievement! 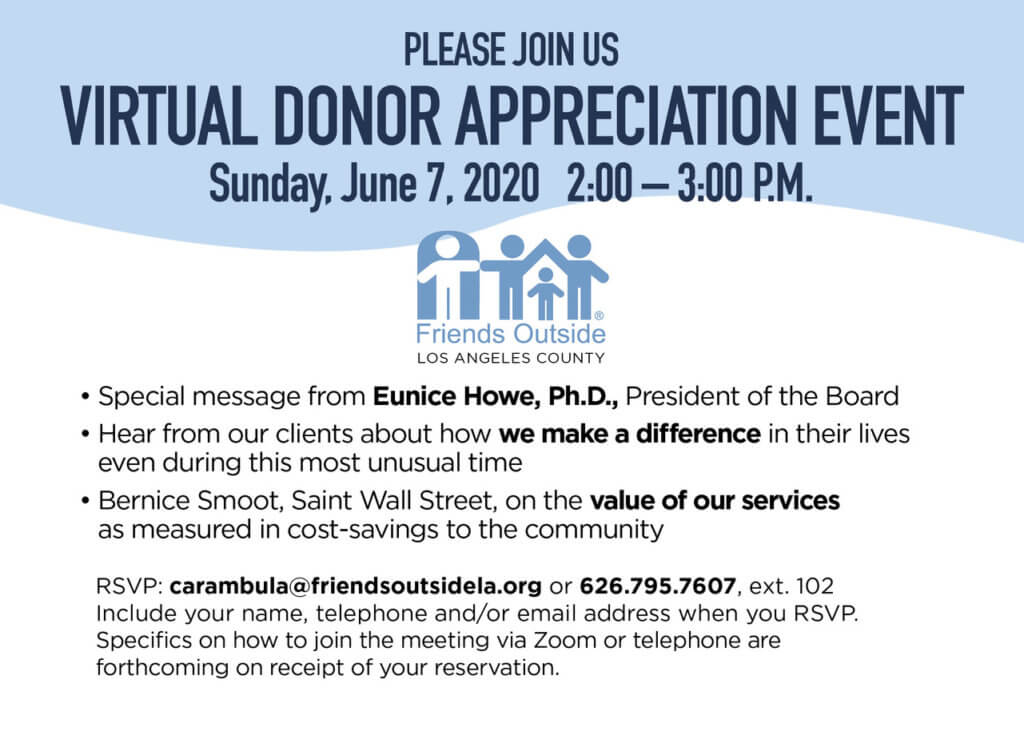 Dear Friends of Friends Outside in Los Angeles County:

Please go to link below and take needed actions.

The Coronavirus Aid, Relief and Economic Security Act (CARES ACT / S. 3548) would provide four months of operating expenses from March through June as grants provided the funds are all used to pay staff making $100,000 or less annually. (Bill not  passed yet)